Symantec recently announced the launch of Symantec Backup Exec 15. Back in November of last year, beta registration opened for existing Backup Exec customers. This gave participants the opportunity to test, validate and provide feedback on the upcoming release. Now the wait is over.

Backup Exec 15 delivers powerful, flexible and easy-to-use backup and recovery for virtual and physical environments. It’s designed for the entire infrastructure on various platforms such as physical, virtual or cloud.

With Backup Exec 15, you can protect 1 to 1000s of virtual machines and servers all from the same user console for optimal performance and efficiency.

For a complete list of system requirements and supported devices, please refer to System Requirements.

With the beta program testing and launch of Backup Exec 15, initial feedback from the tech industry has been quite positive.

As a leader in strategic data solutions and a trusted Symantec partner, Dewpoint is uniquely positioned to share insights on the evolving data landscape and to provide expertise on Symantec Backup Exec 15. 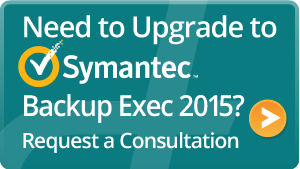 Check us out on social media!

Login to My Dewpoint

Dewpoint has been a terrific partner as we embarked and engaged ITaaS, assisting us in refining our customer service and support Service Level definitions, measuring continuous improvement to operational performance, and adding to our strategic sustainability, all at a competitive (yet lower) cost of to the City. Dewpoint works with you, for you, as a partner.

~ IT Director, City of Grand Rapids